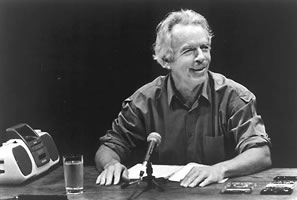 I had the chance to work as stage manager for Spalding Gray for a summer when I was working with the Illusion Theater and the Walker Art Center in Minneapolis in 1985. He was the most compelling storyteller I ever had the privilege of listening to. At the time, he was performing about eight different monologues ranging from “Sex and Death to Age 16” to “Swimming to Cambodia.” 8 or 9 performances a week, I was mesmerized.

If you don’t know his story, Gray (who unfortunately passed away in 2004) was best known as a storyteller, but he had performed in happenings in the 1960’s, and also worked with the Wooster Group at the Performing Garage In New York. The Wooster Group is a theater troupe best known for incredibly complex and difficult performances, often with a hidden narrative.

I was struck the change he in his approach and by his commitment to communicating clearly what was in his mind. I think this is a profound and very important realization; no matter what media you work in, clarity of intent and purpose are key to the ability to communicate effectively.

Another insight from Gray’s work stems from the intensely personal nature of his stories; his performances were quirky, often meandering, and nothing if not true to his own personality. From my own experience, I have found that design and strategy get watered down when they lose their individuality. People respond to work that is authentic and based in personal experience.

Now the words of Spalding Gray are back on stage. Ben Brantley posted a glowing review in the New York Times. Five actors take on readings from his shows and journals. I won’t be in New York to see the show this time around. If you are, you should go.