When I left Sapient (five years ago now) one of the commitments I made to myself is that I would do work for organizations dedicated to changing the world. I’ve been fortunate to work with several non-profit/NGO organizations that are engaged in socially progressive development. One of these is International Development Enterprises (IDE). IDE has done tremendous work in improving the lot of the world’s poorest people. They have brought millions of farmers out of poverty, mostly my improving irrigation techniques.

According to Paul Polak, founder of IDE, there are over a billion people in the world living on less than one dollar a day. In their case, getting out of poverty means moving from one dollar a day to two dollars a day. Their core product is a treadle pump, which allows human-powered irrigation, as well as a series of other, mostly related products.

IDE is an amazing organization, but not one that is particularly well known outside the development realm. For instance, they haven’t put the amount of energy that Heifer International (another group I’ve worked with) has into grass roots fundraising. So, it’s great news that IDE has received 13 million dollars from the Gates Foundation for their efforts. My understanding is that this will double the budget of IDE. Pretty incredible.

What is not clear to me is whether this is an ongoing commitment, or a one-time bequest. My hope is that IDE will take this as an opportunity to improve their awareness in the broader community so that this seed money can serve to establish a strong ongoing base of operations.

Here’s a picture of the treadle pump in action: 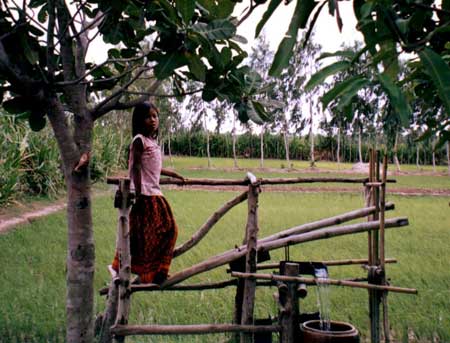