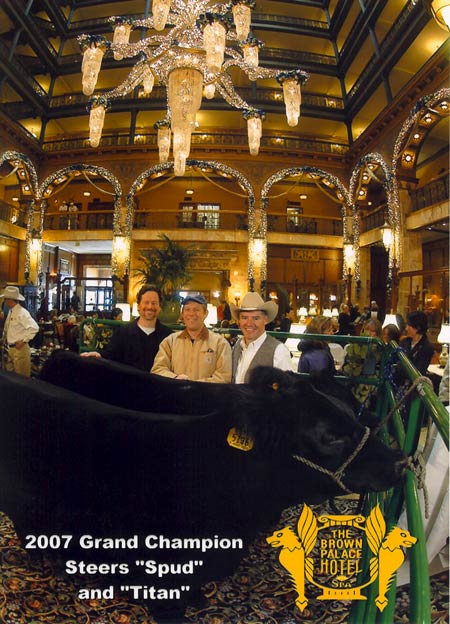 Every year during the stock show the grand champion steer is exhibited in the lobby of the Brown Palace Hotel for one day. As befits such a fancy place, he drinks out of a silver bowl. While the steer is there, you can go get your picture taken with him. It’s free, it’s fun, and it’s a Denver tradition.

This year, my buddy Allen Hill and I went down to get our picture taken (his suggestion). I’m not sure who the guy on the right is, but I think he’s trying to make sure nobody gets killed. As you can see, this year brought in two champion steers (Spud and the reserve champion Titan). They’re good looking fellers, raised by kids in the Future Farmers of America. Spud was raised by Lance Unger of Carlisle, Indiana. Unfortunately for Spud, he’s well on his way to becoming someone’s dinner. Here’s what 9news has to say:

Weighing over 1,300 pounds, Spud sold for $80,000 during the auction. He was bought by the Emil-Lene’s Sirloin House.

One thought on “The Best Thing to do in Denver, Ever”