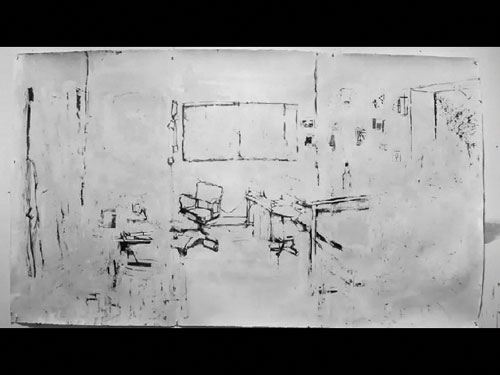 Hadley and I are working on some stop motion animation projects, and we’ve just finished an initial prototype, which we’re calling “Retreat”. You can see a compressed version on hadley’s blog (the direct link to the page is here). There’s no linear narrative, it’s more of an exploration of psychological space. Mostly we’re having fun exploring ideas in motion.

The original painting is 9 feet wide and 4 feet high, so finding a way to get the type of detail it requires while also getting it small enough for presentation on the web has been challenging (Warning, geeky technical information follows). We captured the still images (over 600 of them) in iStopMotion Pro from our Nikon D40 – the original animation is in full HDTV (1920 x 1020 pixels), with a 30 second clip coming in a little over 5gb in size.

From there, I brought the animation into Final Cut Studio 2 (this has been an expensive little experiment) for editing. I played around quite a bit with output, and eventually decided that the best quality/file size tradeoff came through outputting as an mpeg-4 file (m4v format). For the web, I’ve output it as a 640×480 m4v file – I tried uploading it to youtube, but the resulting file was just too blurry and made the movie unwatchable. So, I’ve put it up using the anarchy media player which has a handy wordpress plugin.

Ultimately, we’re hoping to present our animations as part of an art installation – with the new high resolution DVD formats coming out (not to mention the continuing progress in computer presentation systems) we figure we’ll be ready when the Whitney calls and asks us to be part of the next biennial.