It’s been a while, so I thought we should chat. I’ve been ignoring you for a while, and I thought I should explain why.

I know, saying that we need to talk sounds more than a little threatening. Few phrases strike fear into the heart more than hearing those words. It sounds like the end of a relationship. But in this case, it’s not the end, just a change of focus.

This isn’t a dear John letter, or a dear diary letter. A dear blog letter is more like it.

The truth is, I’ve been busy, both with work and with all the chores that come with spring – house and garden, events, trying to lose the extra pounds I put on over the winter. But that’s no excuse for not paying attention to you. Not an excuse, but maybe an explanation.

For over a year I was pretty committed to writing you on a regular basis. And then, there comes a long break. Not that you would know – after all, you’re not a person.

But what are you, really? A semantic publishing system? A vehicle for promotion? An opportunity to offer thoughts on a variety of topics? I’ve been thinking quite a bit about what it means to put thoughts down in this very specific venue.

In a sense, blogs go backwards. They require constant attention to be timely, but at the same time the newest posts push all the older ones down the queue, making them somehow less important than the next one up the list.

I heard an interview with Dave Davies on Fresh Air talking about the impact of blogs on politics.

On the one hand, there’s a compelling immediacy to the blogosphere. Thoughts, experiences, and beliefs are available immediately. There’s a buzz, a unmistakable seductiveness. The citizen journalist, the amateur, the crank, all of us have the same access to virtual ink as the professionals, the so-called experts. It’s fast, connected, and cheap to produce.

On the other hand, there is something disconcerting about posting without editorial control or some sort of professional standards, some sort of fact checking. Everyone needs an editor, I really need an editor. Davies said that he isn’t sure that he wants to read what anyone says if they haven’t spent at least a day working on the story.

Spending a day on a story is a luxury that I don’t often have – and lately I’ve been working on some new projects with a more multimedia bent (video, flash, and animation type of stuff). All of that takes time, time that I don’t have to spend writing you.

Part of it, of course, is a question of priorities and focus. It’s not just writing you that I’ve been avoiding. I’m also avoiding some of my contact with the fast-paced world of information overload (sort of a news fast as Dr. Weil would call it). It’s difficult to stay focused on everything else while still trying to accomplish my own goals.

But mostly, I just needed to take a break. Get my thoughts together, consider the priorities of living a fragile life on a fragile planet. Cogitate on slowness and the long now.

So there you have it. I’m not leaving you. Change is good.

Hey, here’s a picture of the backyard garden. It’s looking good this year. 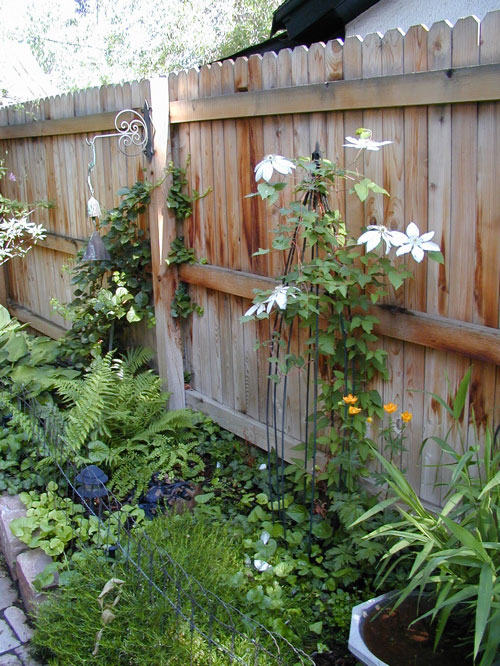