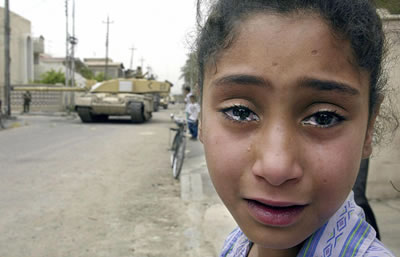 Two years ago I worked with the American Friends Service Committee to create a three minute movie honoring the dead in Iraq, both American and Iraqi. It’s part of their “Eyes Wide Open” project, where they display a pair of boots for each American serviceperson killed in the war.

I’m very proud of the movie; it’s incredibly moving and was frankly very emotional to work on, probably the most gutwrenching project I’ve ever done. We sorted through hundreds if not thousands of photos, and culled them down to just those that best expresses the pain and suffering of all those who are part of this misguided conflict.

Now, two years later, we are approaching another milestone; very soon, we will pass 3,000 American dead in the conflict. Of course, this doesn’t begin to count the many tens (hundreds?) of thousands of Iraqi’s killed, nor those injured or whose lives have been ruined. I went back and looked at the code of the movie I built (we count the Americans killed), and two years ago the number was 1,400.

I think the most disturbing part of this experience is how little change we were able to effect. I admire the folks at the AFSC for their dedication, and I suppose there is some late (very late) admission that the invasion was a mistake. But the suffering goes on, and gets worse. Our country’s image has been wrecked abroad, and we are still divided at home. The human cost and the financial cost are frankly beyond imagining.

Anyhow, here’s the link if you want to see the movie:
www.afsc.org/iraq/