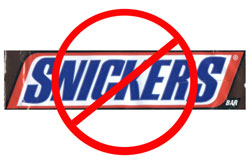 I alway liked Snickers. Good candy bar, a peanut in every bite and all that. But I guess I’m gonna have to give ’em a break for a while.

During last nights superbowl Snickers ran an ad (called “after the kiss”) where two guys share a candy bar, meet lips, and rip their chest hair off to prove how manly they are.

This happens during the Superbowl where Tony Dungy becomes the first african-american head coach to win an NFL title.

The timing wasn’t lost on me, or on King Kaufman who has an article on the topic in today’s Salon. I guess it’s true that gay is the new black.

I suppose you could argue that the agency was trying to acknowledge the existence of gayness, but without offending the delicate sensibilities of their homophobic audience. But it just ends up offensive to everyone.

Update: February 6th
King Kaufman reports that Mars and TBWA/Chiat/Day have pulled the Snickers ad campaign. He also quotes Molly Willow in The Columbus Dispatch: “I’m ready for homophobia not to be funny anymore.”