“Though silent, he speaks”

In cemeteries throughout the west, Dum Tacet Clamat is written on hand-carved gravestones paid for by an insurance company called the Woodmen of the World. In an era where people had no other form of insurance, they made sure that their ultimate resting place would have an appropriate marker.

Jill and I ran into Dennis Gallagher (Denver City Auditor, Historian, and Raconteur) last Saturday; it turns out that we share an interest in preserving one of the unique parts of Denver’s cultural history.

A hundred or so years ago in the western United States most people didn’t worry much about art; there were more pressing concerns. Looking back from a distance, the most significant works mostly went in two directions; either they were architectural, or they were in cemeteries.

Denver’s most significant (or at least compelling) collection of funerary art is in Riverside Cemetery, located north of downtown off Brighton Boulevard. Jill and Maddie and I go walking there a couple times a week; it’s by far the calmest, most private place in the city. (If you’re interested, I’ve posted a few photos of Riverside as a set on Flickr. 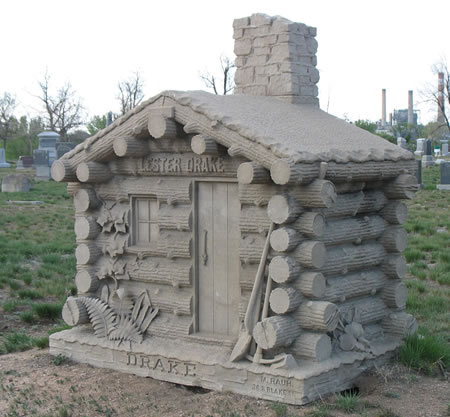 Unfortunately, Riverside is drying up and falling apart. This evocative collection of stories about the people who founded Denver, who lived and died in Denver, is barely hanging on. A few years ago they lost their water rights (even though the cemetery is right on the banks of the Platte River). So now the trees are dying, the grass is brown, the old roses aren’t making it through the hot summers anymore. It’s a shame.

The city of Denver should buy Riverside and turn it into a park; sure, it’s in the middle of an industrial area, but industrial areas close to downtowns are being renovated all around the country.

We’ll see what happens with this; hopefully Dennis and his buddy Tom Noel can raise some awareness about this little known jewel. Riverside has a lot to say. It’s just lacking the right voice to say it with.