It turns out that neither of my two writer friends had ever heard of the visual thesaurus. And that’s a shame. The visual thesaurus is one of the best websites in existence. It’s right up there with metacritic, which is high praise indeed. Though if you’re a writer, I’m not sure how valuable it is to know that Hot Fuzz got an 81 (personally, I thought it was pretty good but no “Shaun of the Dead”).

When thinkmap produced the first version of the visual thesaurus tool I thought it was cool, but a little toward the clever-but-not-so-useful end of the spectrum. 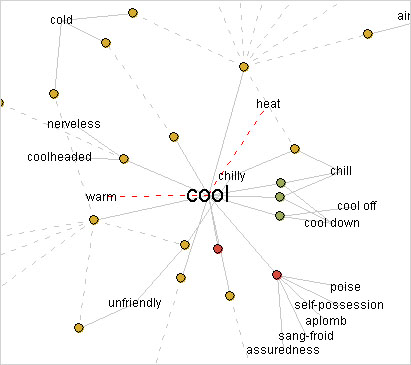 Since that time the site has expanded to include a rich and enjoyable set of regular features on writing, vocabulary, and the history of language. For instance, the word of the day theme for today is ‘big guns’, and the word is dreadnought. And there’s a great article in the language lounge on the be-words: Bewitched, Bedazzled, and Bewildered (and others).

One thought on “Words for Writers”