Bill Moggridge opens with this comment in the introduction to Chapter 10 of his book “Designing Interactions”. In some ways it’s the best and simplest description of the design process I have heard in a long time. 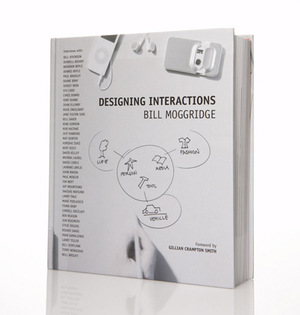 I finally got around to picking up his book this past week, and it’s a remarkably comprehensive compendium of information about how we went from the Lisa to the Blackberry. It feels like a textbook, and clocks in at over 700 pages. Not all of it feels pertinent to design in a broader sense – the definition of interaction design is surprisingly narrow given the amount of interviews Bill engages in – but there are tremendous nuggets that anyone who does user-centered design will find reassuring and even reinvigorating. If nothing else, every designer should read (and re-read) Chapter 10: ‘People and Prototypes’.

For the past three years, I’ve been a speaker and team mentor at a great design event called “Image, Space, Object”. It’s put on by the AIGA and run by Mike and Kathy McCoy and Fred Murrell. I’m lucky to have been a part of the event; it is one place where my three passions (user-centered design, storytelling, and rapid prototyping) all come together. For three days participants work collaboratively to create something completely new.

This August the event is happening again, with a slightly new theme: “People Centered Brand Experiences”; while some of the studio mentors/presenters are coming back again (Rick Robinson and Hugh Dubberly have been there since the beginning, while Chris Hacker will be back for the third time), this year’s special guest is Mr. Bill Moggridge. Here’s how the process is described on the conference site:

People-centered narratives serve as a starting place for the design of graphic, interaction, product and environmental experiences. Research, modeling, team ideation and experiential prototyping are employed throughout the three days to produce tangible final presentations that can be brought back to work and used with your design teams.