One of the more difficult parts of doing work without easily identifiable artifacts is describing what you do.

When I get asked what I do for a living, I usually answer by saying “design strategy and research.” Which almost always brings on a second question; “what the (expletive deleted) is design strategy and research?” At which point I wonder how much this person really wants to know. If I sense it was a throwaway, usually I’ll just respond by saying something like, “oh, you know, websites and stuff.” Then we can get back to the more important questions of sports and weather and TV shows.

But every once in a while there will be a followup question, and I’ll realize that either the person is either involved in the design business (or the design of business) or they are just curious about what differentiates design strategy from other forms of creative endeavor. I’ve tried various approaches to describing it, and heard or read of many others through the years. None of them are completely satisfactory.

Sometimes I’ll start in with my own niche, and discuss the importance of storytelling in the design process.

“Working from as clear a strategic goal as I can develop with my client or partner, I engage in a combination of observation and interviews, through which i develop an understanding of the persons who might be helped by the product or service. Then, this research is applied to the generative process through a combination of models, scenarios, and prototypes, often generated in a collaborative environment. Finally, we critique the alternatives and iterate to a greater level of fidelity.”

Then they say, well, yeah, but what do you do?

So then maybe I’ll move in with a quick synopsis of the Tim Brown/IDEO talking points about the value of Design Thinking. Or the idea of the ‘anthrodesigner’ (as put forward by Dori Tunstall), who encourages her students to become hybrid researcher/designers who are adept both in observing and creating.

Or maybe the description of Transformational Design as put forward by Hillary Cottam and the Red design team of the British Design Council in 2006:

1) Defining and redefining the brief: Whereas traditionally designers are brought in to follow a brief, the transformation design approach involves an analysis of the wider implications of a design problem.

2) Collaboration between disciplines: Recognizing that complex problems need to be addressed through a multI-faceted approach, we rely on collaboration for results.

4) Building capacity not dependency: Transformational design seeks to leave behind not only a designed solution, but the tools, skills and organizational capacity to respond to change.

Great, interesting stuff, and brilliantly done by firms like Stone Yamashita. But, it’s a lot to throw out at a cocktail party. Maybe there’s an easier way to talk about designing something intangible, or at least apparently intangible.

So, I was intrigued when I heard about this new idea, promoted by FORA, a Danish quasi-governmental group, called Concept Design. Concept Design is, according to the subtitle, a way to “solve complex challenges of our time.” There is not a whole lot of information on concept design available on the web (yet, at least), though the paper is available for download from the FORA site as a PDF file.

According to the paper,

Today’s companies are seeking answers to the question “what?”. What should companies focus on? What problems should the companies’ innovation solve?

This feels pretty accurate to me, though of course it risks oversimplifying the design process. Once concern I have is that the term ‘concept’ feels a little thin, for instance in comparison to the idea of ‘transformation’, though it does point to the formative stages in the process where design strategy is particularly appropriate.

The paper goes on to say

Concepts are solutions to unsolved problems or new solutions to problems that are solved in a poor manner. A new concept can be a product, a service, or a combination of products and
services.

Concepts and business strategies are approached strategically, and multidisciplinary work is performed using a combination of competences from business management, social science and design.

According to the following diagram, concept design lies at the intersection of business, design, and social sciences. 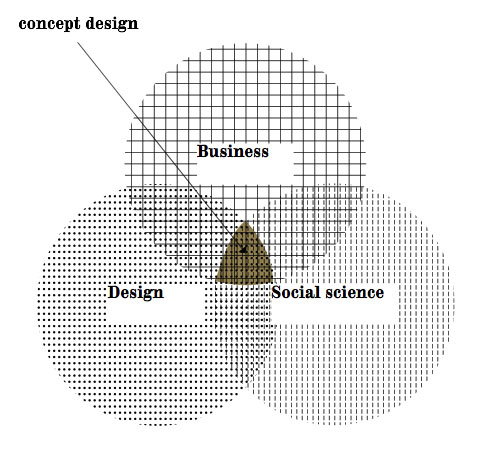 What’s the difference between transformational and concept design? Perhaps concept design has the potential to focus more narrowly on a particular problem, rather than working on a the broader idea of organizational change, though certainly there is overlap between the two.

The writers of the paper did a great job of vetting their research, and the document includes case studies from a wide range of companies in Europe and the United States, including IDEO, Frog, Lego, Philips, Gravity Tank, BBDO, and others.

I’m not entirely sure if concept design is an idea with legs or not, though it has been adopted by the AIGA and appears to be a topic of conversation at the 2008 Torino World Design Capital events. At the very least it provides some new ideas.

And maybe something to talk about over dinner.

9 thoughts on “what is concept design?”