“My deal with illustrators was that I couldn’t pay them much, but I could give them freedom to function.”
–Patrick JB Flynn, art director, The Progressive, 1981-1999

For 18 years, Patrick JB Flynn was the art director at The Progressive, the Madison-based non-profit magazine edited (until 1994) by Erwin Knoll. And during those 18 years, Patrick provided editorial illustrators with an unparalleled opportunity to express themselves in whatever manner they desired. The result was a remarkable creative partnership between Patrick and many of the best illustrators of the last two decades of the 20th century.

The list of illustrators he worked with was astounding, and even more amazing given the tiny fees he could offer. Steve Brodner, Joe Ciardello, Sue Coe, Henrik Drescher, Brad Holland, Anita Kunz, Arnold Roth, Ralph Steadman, and many others. And not just the big guns (though plenty of those); he also allowed emerging illustrators (por ejemplo mi esposa, hadley) the opportunity to “produce art without editorial meddling.”

Now PJBF has curated an exhibit of some of the work created by illustrators during his tenure at The Progressive; called “Another Voice“, it is currently being presented at Northern Michigan University, and is also available through an online gallery that shows the remarkable level of quality he was able to bring together. In an article on the Another Voice website that offers a great introduction to Flynn’s approach and results, Steven Heller says the following:

Only time will tell whether The Progressive’s art can equal the staying power of the old masters’ most iconic works, but for now it is among the best indication that contemporary graphic commentary, which can be pondered and interpreted at will, has a place in the fast-moving electronic information age.

In the end, Patrick JB Flynn fell prey to the whims of editorial fashion — his unwillingness to compromise got him fired, and The Progressive is much the worse for it. The magazine no longer has the multidimensional edge that enlivened it during those best years, and the writing suffers as a result. No other magazine in our era has so consistently, and for so long a period of time, presented illustration as art. It’s a shame it is no longer around, but it’s great to be able to take another look at it. 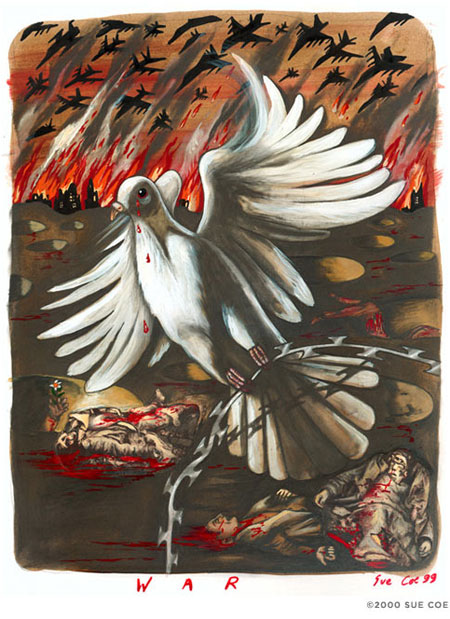