Summer is a time for casual enjoyment in a reflective but less serious manner. In Denver, the best of summer culture happens in Lakewood at the Lab. The Lab at Belmar is a somewhat eccentric art space in a new urbanist development; it’s run by Adam Lerner, who is committed to establishing a world-class arts venue in a Denver suburb. So far, he’s doing a pretty good job of it; in the first year he’s put on shows by Isaac Julien and Liam Gillick. But, it’s not all super serious; Adam and his team realize that you have to have some fun to get people out to the ‘burbs.

In the summer, Adam puts on a great series called “mixed taste”, which is a series of programs combining tag team lectures on unrelated topics. It goes on all summer – this Thursday, it’s Swiss Typography and TV Theme Songs. Next week, Kurt Cobain and Solar Eclipses. And it goes all the way to the end of August, with an estimable finale: Marxism and Kittens, Kittens, Kittens.

The lectures are short, to the point, and entertaining. If you don’t like it, there’s another one coming shortly. And, while you’re there, check out the exhibit of Fang Lijun’s Heads, including the main room showing over 15,000 individual heads. Impressive. Visit the lab site at belmarlab.org for more information. 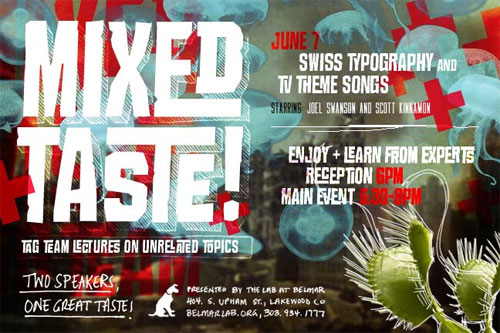